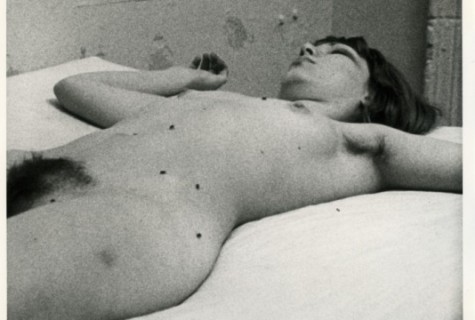 Six Film Scripts (1964) and Imaginary Film Series (1968) comprise a set of ideas, devised by Yoko Ono as part of her broader “instructionals” practice, begun in the early 1960s, notably with the publication Grapefruit (1964). Yoko Ono calls these film scripts “scores”, reflecting her contact with the ideas of international Fluxus, where scores were a common practice for instigating performances or just thinking.

Yoko Ono’s film score works often propose a starting point – as opposed to how a traditional continuity film script circumscribes each and every action, utterance, etc: If a conventional film script is a blueprint, a film score is a mud-map. The tenor of Yoko Ono’s film scores is alternately playful, blackly comic and naive: make a film about “Mr So… from cradle to grave” (Imaginary Film Series: Shi From the cradle to the grave of Mr. So, 1968); show a man and woman lying in bed together with their four year old child: “All they do is just sleep, and the 366 sexual positions are all in the mind of the audience”(Film no. 6 – A contemporary sexual manual, 1968).

You can read the complete ‘film scores’ for yourself here.

The film scores by Yoko Ono interpreted by the Experimental Universe artists bridge two important historical modes / movements that have been central to our thinking at OtherFilm since we started in 2004 – Conceptual Art and Structural/Materialist Film.

These modes share a lot of commonalities – the simultaneous decentring of classical notions of the spectator and refutation of the romantic author; a love of ideas rather than “stories”; a critical stance towards the institution of art as jumped-up commodity speculation dependent on the accrual of surplus value to ‘dead’ objects.

On the other hand, held up together, there is some friction between conceptualism and structural-materialism. For instance, conceptual art’s privileging of ideas over the production of individual objects is bound to a rejection of formalism – this somewhat sets it against structural/material film’s emphasis on form, a function of its hardline medium specificity. (Not for nothing did Tony Conrad call structural-materialism “the result of a shotgun marriage between 1970s Marxism and deconstructionist theory!”).

Where structural-materialism is rigorously anti-illusionist, conceptual art is playful; where the former is explicitly – if academically – into critique, conceptual art’s politics are more individualist, oblique. As a practice, one is severe, the other diffuse. And, crucially, while many structural-materialism films are “conceptual”, they are first and foremost “about” one key idea: how the image works to organise our consciousness. So we’re interested in how these two methodologies might ‘play off’ against each other in Yoko Ono’s works.

Central to both Structural-Materialist Film and Conceptual Art, however, is the idea of a structuring device which enacts a central liberation from the fetters of romantic creation – a series, a pattern, a formula, a score. This last one, the score, is most interesting to us.

For such a simple idea, the score is remarkably complex – it orders as it opens up. We’re interested in teasing out the tensions, correspondences, compatibilities and irreducible differences within competing ideas about the ‘score’ – and finding out how this friction ‘plays out’ in a contemporary setting.

We want to explore the function of a ‘score’ in the context of experimental film; how it allows another artist to ‘perform’ the film (in this case decades later) – radically departing from or remaining strictly faithful to the “original” idea. Do Yoko Ono’s film scores position her as a “composer”, and therefore, the responding artists as the “players”? If so, then what freedom are the “players” given? How much can they take?

An instruction might be commonly understood as a condition that circumscribes or (de)limits freedom. At its directive, peremptory worst, an instruction can even be the opposite of free: coercive. On the other hand, a ‘visionary’ or ‘open’ instruction can work to do the opposite – strategically exposing specific conventions underlying or structuring so-called ‘free acts’. As Elliot Carter states, “A musical score is written to keep the performer from playing what they already know, and to force the exploration of other new ideas and techniques.” He lived to 104 years of age, so we believe him. This is the case for the experimental music scores that were among Yoko Ono’s key early influences and which permeates the album (Unfinished Music No 1: Two Virgins) she made with John Lennon.

So in the case of the scores that are the foundation of this program, the tension between the-score-as-order and the-score-as-invitation will be taken up by our artists as they each interpret one of Yoko Ono’s 100+ “instructionals” from Six Film Scripts (1964) and Imaginary Film Series (1968). Ultimately, we want to approach the scores in Yoko Ono’s work as both a structuring device, and an un-structuring platform on which our invited artists can imagine new work. Our next two blog posts will include the artists’ thoughts on their interpretation of these ideas and an outline of the program for each night.