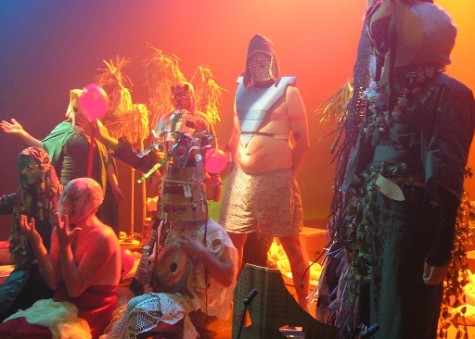 A. Hi God People are primarily responding to Yoko Ono’s 1971 album ‘Fly’, including reference to Joe Jones’ self composing kinetic sound sculptures and visceral vocalisation. Imagery and resonant themes of ‘touch me III’ will further inform the performance. Our work simultaneously runs the gamut of spectrum from structure/score/instruction to spontaneity/intuition/improvisation. Concepts used in the piece have initially been consciously considered but closer to performance an abstract subconscious digestion will also manifest. We’ll also feature ‘wild card’ performances from two members who will have been given very little information on what other members have planned. 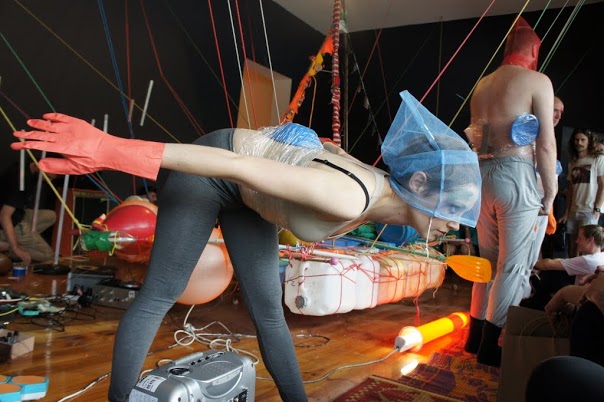 A. We agree that “the score is both a structuring device and un-structuring platform to open up new spaces”. It affords the performer initial uncertainty of what the performance will be like, but generally followed by a very fulfilling outcome. In our recent ‘Clak Clak’ performance our score was to respond to Julian Williams’ performance ‘I meet this corner as a paradigm of change’, to wear red, including red tights somewhere on the body, pairs of shoes glued to 40cm wooden planks, and to improvise a percussive movement piece. We were aware of each others’ quirks and talents but despite having very little idea how it would turn out, the score very effectively meshed the piece together during the performance.

A score is potentially a seed for new growth, ideas and practices which would not otherwise have occurred.