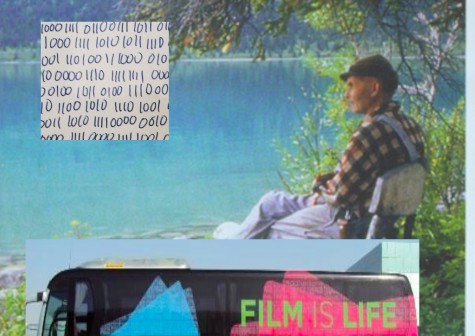 We were invited to interpret Yoko Ono’s film score #6. This commission from OtherFilm in conjunction with the MCA has raised some interesting questions for us regarding the nature of Yoko Ono’s original ‘score,’ which consists simply of three instructions:

1. Give a print of the same film to many directors.

2. Ask each one to re-edit the print without leaving out any of the material in such a way that it will be unnoticed that the print was re-edited.

3. Show all the versions together omnibus style.

As a point of comparison to Ono’s film scores it may be productive to initially discuss the more or less standard and most common use of the term ‘script’ with regards to film, and as we understand it. Mainly because they are also referred to as scripts by Ono and other writers who have commented on and attempted to interpret her work, and prefaced by OtherFilm’s introduction to the Experimental Universe program. Firstly, the term ‘script’ may describe a conventionally long and overwhelmingly content-rich text outlining a proposed film. In industry standard form and in industry standard detail, a film was often subjected to meticulous and exhaustive minutia when it came to its production.  For example, it may contain all or most of the scenes that end up in the final film and all or most of the dialogue (most films having dialogue) – mutatis mutandis.

Sometimes film scripts are written as ends in themselves, but usually they are considered tools, or hope-to-be tools, used on-the-way to making the film.  They contain a vision for the complete film, but an open and incomplete vision.  A significant creative leap must be taken between such a script and a finished film.  The conventional film script stands in a similar relation to those of blue prints before a finished building.

Yet the analogy is not quite correct.  From the outset the architect intends and expects that their plans represent the definitive creative statement that defines the building.  The architect conventionally does not expect the builder to ‘get creative’ with the plans; the architect’s ‘script’ is intended to be already creatively complete.  Their ‘script’ can be acted on by multiple competent builders and produce identical results.

The professional script writer would be foolish to have such an expectation. Cinema, at least industrial cinema, is an industrial art and is inherently collaborative.  The creative task is spread across the creative team.

By using the idea of the score,  Ono is drawing attention to film’s affinity with music as a time-based art.

The classical music score tends to stand somewhere between these senses of ‘film script’ and ‘blue print’.  Every performance of Brahms’ 2nd symphony, so far as it is competent, will be unmistakably Brahms’ 2nd symphony. Yet Karajan plays a part, as do the 2nd violas.  The conductor and the players ‘en-liven’ the score through living it in the creative moment of the performance.

Where here for Ono’s score?  None of the relations listed above and played out here – the script writer and creative team to the script and the film, the architect, and builder to the building and blue-prints, the composer, conductor, and musicians to the score and the performance – are absolute.  Builders might be given a few notes, a rough sketch and some materials and create a fine building. Musicians may pick up instruments and (re-)construct a symphony. A director might be given a film script so detailed and exacting that they merely have to go through the motions to make the film, but in each case the creative balance shifts by degrees around the conventions I have described above.  It is possible, just possible, that a different kind of creative work will emerge.  Herein lies the potential genius of such instructional gestures.

Ono’s film  #6 is a gesture.  It isn’t a score like Brahms’ 2nd symphony is a score.  Its enactors do not relate to it like musicians, or even a conductor, to a score, using their musical creativity to ‘en-liven’ the musical content in the creative moment of performance.  They are doing much more than that.  Nor does it stand historically to a score like a folk-tune may stand to the great musical edifice of a Shostakovich or a Mahler  score.  The folk-tune is a specific, but diffuse, content-filled musical gesture.

This is not a matter of degree but of kind; Ono’s film  #6 is a gesture of a different sort, a conceptual sort with artistic intentions. It does not stand as a script to a film in the sense outlined above.  It says nothing of the fleshy content of the finished film work, its aesthetic trajectory, or even its basic structure, short of ‘omnibus’.  Calling it a film score deliberately confuses its import and is at its best a provocation.

AFW has been operating as a membership based co-operative and artist run film lab for over a year now.  The mission of AFW is to encourage the use of cine-film in contemporary local art practice.  In this digital age, that mission inevitably results in hands-on laboratory-based practice being fairly central in what we do.  In responding to the Ono script, it made sense to us, as a group whose central connection with each other is the film lab, to interpret this commission subjunctively; i.e., imagining what Yoko may have given us had she known us and the laboratory-centred nature of our group.

To this end, we interpreted ‘re-editing’ in terms of the re-construction possibilities of the dark room and the lab. As over ten AFW members are involved in the project, and since we were working on 16mm stock, we decided on the convenient 100′ length for the original film and each variation, 100′ of 16mm equalling 2 minutes 45 seconds length. With ten or so variations, we will be making one 25 to 30 minute omnibus 16mm film.  This is our goal.

One AFW member, Richard Tuohy, was chosen to construct the original 100′ film and soundtrack.  This film comprises around 15 shots with a soundtrack made from a similar number of sound elements.

At our first meeting discussing the project we observed that some of Ono’s instructions seemed problematic, if not plainly contradictory.  She specified to give prints of the same film to a number of people and have them re-edit those prints, but in such a way that it would not look like they had been re-edited.  Of course, a print with splices will in some sense always look re-edited.  Similarly, the 26 frame off-set between picture and sound in 16mm prints would also mean that any edited print would immediately stand out as manipulated when compared with the original because, unlike with the original, the re-edit would of necessity have a 26 frame (a little over one second) delay between any picture edits and the attending change in the sound.

But then we considered the historical context and the nature of what would have been taken for granted by the film practitioners at that moment.  For instance, a resourced film-maker responding to Ono’s idea in the 1960s would have thought nothing of dubbing off the optical sound from the original print and recording this sound onto fullcoat sprocketed magnetic film.  They could also make a slash-print of their original print, then play with both in sync on a flat-bed film editor.  They could then cut the original print to match their edited workprint, then have a married print made of their finished film on reversal print stock.  That would be a standard working procedure and a standard way to interpret the ‘re-edit’ instruction.

For us, this observation drew attention to the context-dependent nature of language, and especially the technological factors to consider when interpreting such an instruction out of, or in another, context.  In some respects, we have to take her words here out of context, at least in the above sense; there were technological assumptions about what would be understood by terms like ‘re-editing’, etc.

This had implications for us with regards to arriving at an agreed set of workable strictures for our interpretation of the original Film No. 6 instructions.  For instance, how should we read ‘without leaving out any of the material’?  Does that mean ‘use every frame’, or ‘use every shot’ or perhaps ‘use every filmic idea’?  Given the changed technological and practical contexts of the 50 year interval between writing the score and our being commissioned, should or even could the interpretation of these few words be understood as ideally static?  Similarly, since there is no more reversal print stock how could we meet the challenge of  ‘it will be unnoticed that the print was re-edited’?

Yes, a virtual analogue of the most straightforward unpacking of what may have been Ono’s intention/assumptions regarding the technology she was thinking about at the time could be had via working with digital video.  Endless ‘edit-less’ synchronous re-editing would be readily possible under the most straightforward interpretation of her script.  But the commission was given to us – AFW – not a video group.  We decided we had to act as though that was deliberate! The medium is the massage.

Though many arguments were put forward, our meeting didn’t settle on one definitive set of strictures, or rules, under which to proceed.  We did agree on the 100′ length limitation.  We also agreed that for practical reasons we would not require each finished contribution to be splice-free.  We also agreed that the sound would be handled digitally (again for practical reasons). We agreed, as said above, that ‘re-edit’ would be interpreted with regards to our particular set of skills and opportunities afforded to us in our dark-rooms.  We chose to each go with our own heart-felt interpretations of ‘without leaving out any of the material’ might mean – i.e., including in our dark-room ‘re-edits’ all of what we would take ‘the material’ to mean.

This “looser” interpretation of the score and the hope that the implied banality of Ono’s omnibus film could be approached with the various film-processing and editing techniques that we have been developing in the lab, carries with it intentions for a wide variety of films emerging from the source material; the making of a more spectacular screening which displays the outer edges of the lab’s processing capabilities.

Ono’s gesture #6 aspires to more than this.  We have received it is an open gesture for creative exploration, it is a push to explore.  It is not a work, but a gesture to guide the work.  In this way it is perhaps not even a score, but a suggestion to guide a particular scoring.  It is not a script but a call to scripting!