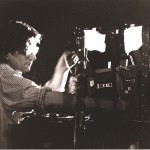 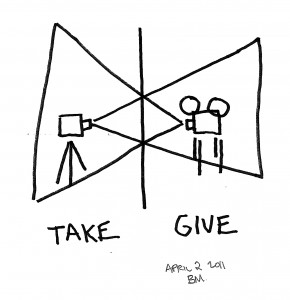 The film projector is a weapon. Its ammunition is raw light. Darkness is both its adversary and its matrix. Radiant blasts inflame the theatre of perception. The void retaliates. Bruce McClure is a black-and-white-ops specialist. Through distillation and magnification, he arms the projector and returns the screen to its partisan position as bearer and maker of meaning. In between the voluptuous spasms that threaten to exceed our capacity to percieve them, we see the truth of hue and the non-sense of space. We feel frantic luminosity and frankly ludic. This is a cinema of thunder and light-en-ing.

New Yorker Bruce McClure augments 16mm projectors, inserting metal filters, so they project basic shapes and textures. In durational expanded-cinema performances, he superimposes multiple projections, generating interference patterns. Using opaque-then-clear film loops, and adjusting projector focus and light intensity, he conjures up optical and physiological effects, his strobing light triggering an array of synaptic responses. The film loops double as a pulsing optical soundtrack, which he modulates using guitar delay and distortion pedals. McClure’s overwhelming, disorienting works tap into a history of avant-garde inquiry into the phenomenology of flicker. He recently played support for Throbbing Gristle, also indicating his allegiance with industrial culture, with its love/hate relationship with the machine/body.