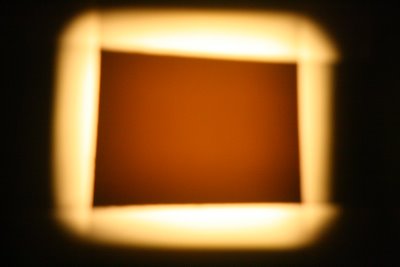 The Fiercer the Fire the Longer the Spoon

Bruce’s 2012 Australian performance, The Fiercer the Fire the Longer the Spoon, will include the following new works;

Bruce McClure’s agency in his projection performances seeks to exclude any discussion of film genre favoring the projector’s role in a dynamic and physical system enveloped in plasticity. Figuratively, his proposition amounts to exploiting the rhythmic motions of an over sized molded jelly embracing it and the possibility of its upset for the benefit of sympathetic cadences sequestered in an audience’s awareness. Sensitized by variety entertainment, his performances are infused with a stimulating tonic for perceptional processing in the directness of physical material. Nominally empty film frames wrestle free from shadow and set off concatenations in the company of optical sound produced by the examination of limbic patterns by the exciter lamp. Projecting on a public assembly of eyes and ears Bruce McClure beats out a fundamental argument that for a nearly empty screen as a manifest of possibility. Carried on the same invoice of goods, sound signals are immediately acknowledged in the echo from the room’s boundaries zippering up the screen’s luminescence, the room and its contents into an irreducible projective situation.