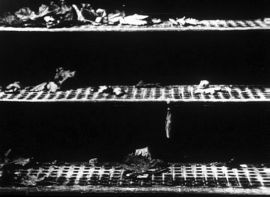 “In MUSICAL STAIRS, 16mm footage of an iron staircase was printed to produce both picture and soundtrack images, i.e., the optical sound sensor in the projector reads the photographs of iron steps as variable density soundtrack. The staircase is filmed from a fixed perspective, producing for the soundtrack a musical scale of eleven stages determined by the camera angles. Sound volume and image brightness were both controlled by varying the exposure setting at the printing stage. The fact that the staircase is neither a synthetic image, nor a particularly clean one (there happened to be leaves on the stairs when I shot the film) means that the sound is not pure, but dense with strange harmonies”. – Guy Sherwin

“Sherwin’s work occupies a special place in experimental film culture for its precise balance between an observational attitude, in which the camera is invariably directed at existing things in the World, and the way in which camera technology and printing procedures enhance and highlight the unique features of those things he is filming”. – Nicky