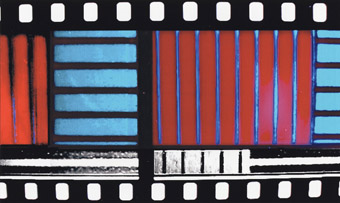 In the history of sound in experimental film, one of the most important creative practices is the use of sound tracks created by images. Most film-sound systems use what is known as an optical sound track, a variable-area film exposure system which runs parallel to the image. The optical sound track is illuminated in the projector by the exciter lamp as it passes over the sound head. The sound head consists of a photodiode which converts fluctuations in light into electronic pulses to reproduce the sound. In this system, the modulated area (width) corresponds to the amplitude of the audio signal.

Usually the optical sound area and the image are re-combined in the film laboratory to form a synchronised print. However, avant-garde filmmakers used experimental printing methods deliberately working into this area to achieve a range of effects. Some handmade filmmakers have scratched into the sound area, while others have printed photographic images to generate sound. Lis Rhodes’ Dresden Dynamo animates dots from the letter stencilling material, Letraset, to produce an onslaught of sound, David Perry’s Halftone uses enlarged news print to achieve a similarly dynamic result. Guy Sherwin’s three films (Musical Stairs, Railings and Soundtrack) deal with the black and white abstraction of the everyday and use it to construct a photographic sound narrative. The films in this program highlight the range of exciting sonic effects possible through the generation of sound by graphic images.