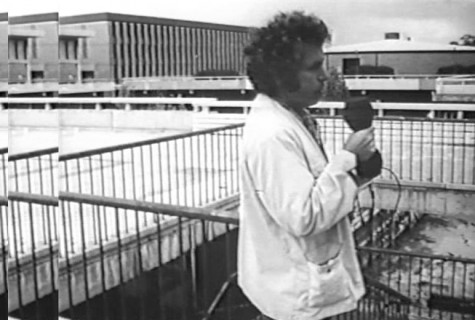 In the early 1970s, Dave Jones came from Canada to work at La Trobe University in Melbourne. (He is now D.B. Jones, Professor of Film at Drexel University, Philadelphia.) Jones was part of a film/media department typicalof the time, mixing theory and practice, very aware of cosmopolitan trends in culture and politics – and much more oriented towards art and anarchism than ‘industrial’ institutions like the official filmmaking-training schools. In one week, for four thousand dollars, Jones improvised Yackity Yack (sometimes referred to as Yacketty Yak) with his colleagues and friends from Melbourne’s progressive arts scene, shooting mostly in a large concrete basement.

It is a brilliant, scattershot satire on the dreams and delusions of radical filmmaking, referencing all the intellectual obsessions of the period: Godardian counter-cinema with its long tracking shots and droning monologues; cinephile reveries on beloved genres and auteurs (courtesy of the legendary critic John Flaus); feminist interventions. In fact, Yackity Yack does for militant film culture what Godard’s La Chinoise did for student Maoism, irreverently contradicting its pious aspirations with authoritarian realities. It is all very politically incorrect, driven by a splendidly absurdist, even ‘screwball’ sense of humour. Australia has not produced another film like it! – Adrian Martin.