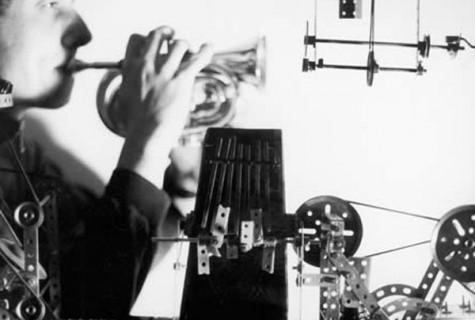 He created – and literally built – his own orchestra called Mecanium : an ensemble of musical automatons constructed from meccano parts and activated by electro-motors attached to acoustic instruments collected from around the world.

“Pierre Bastien uses several tiny cameras to project his Meccano-driven contraptions onto a large screen. Although we can see little wheels depressing organ keys, on the screen it seems we are in some giant factory, where machines of unguessable size perform cumbersome operations to pluck at hawsers or vibrate great flapping sheets – in reality rubber bands and strips of paper. Bastien’s non-synched looping machines naturally have non-human quality, like an off-kilter African drum ensemble, and this strangeness is further magnified by his carefully layered visual projections. Over the top he plays pocket trumpet phrases drawn from the earliest days of jazz, as if King Oliver is muttering in his ear. On the screen the monochrome Fritz Lang world of relentless Meccano is invaded by a beautiful fountain of blue bubbles. Like a blend of Philip Jeck’s heartbreaking turntables and Max Eastley’s lost-in-space musical sculptures, Bastien has created an elegant display of genuine musical surrealism. He has been refining his approach for over two decades – ten years ago Aphex Twin released Mecanoid on his Rephlex label, and this show made it clear why Richard D James was so mesmerized. Bastien wound down his mechanical mysteries after 45 minutes, but I could have happily watched for hours.” – Clive Bell, The Wire

The films, performances and installations of Doing deal with elusive subjects such as music, rhythm, poetry, death, history and memory. He works together with composers, musicians, performers, and dancers, as well as working with artist run film laboratory no.w.here in masterminding alchemical film development. His films relate to the experimental film tradition and beyond combining documentary techniques, found footage and visual storytelling resulting in a style of resplendently his own.

Pierre Bastien and Karel Doing will each perform solo and together in a final set.

Louise Curham is a filmmaker and visual artist working predominantly with found and obsolete moving image materials. Curham’s work addresses the givens of cinema – specifically its stoically fixed relationships between projection / audience / image – tearing these ‘morals’ away strip by frame.

Alison Blunt is a leading figure within the London improvised music community performing solo and contributing to countless groups including Barrel, Lode, Hanam, Burning Wood and the London Improvisers Orchestra. Blunt’s fascination with sound, motion and space has lead her to international solo and collaborative projects exploring the boundaries between art forms and genres and creating, continuously performing and recording new music.

“Blunt’s playing is unique. Eery gut-ripping rattles and chokes form hell are interrupted by ringing notes of heavenly hope. I have never heard anything like it..” – Jeffery Taylor, Sunday Express