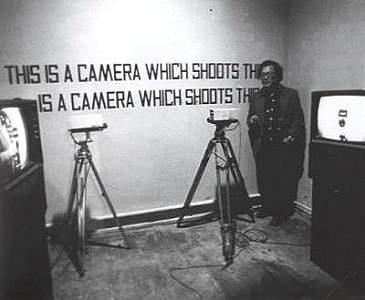 In this collection of videos, Talking Picture (The Structure of Film Viewing) and Shadowman (The Structure of Seeing and Hearing),  Takahiko Iimura presents a series of mind-twisting videos,  meditating on the experience of watching film/video, and of seeing and being seen.  Prodded by a succession of riddles, the videos are lined with humor…,  Iimura touches on a range of significant philosophical questions about linguistics and the nature of representation itself. While watching these videos one is likely to entertain comparisons to Plato’s Allegory of the Cave, Ren Magritte’s “This is not a pipe,”  and the analytic tradition of semiotics.
.
Iimura also draws some tantalizing parallels between some of these Western philosophical inquiries with Asian concepts of representation; for instance, in Shadowman,  Iimura observes that the Japanese word for film, eiga, literally means “reflected picture,”  the kanji character (映画) coming from the Chinese literally means  “electric shadow picture,” pointing back to Plato’s Cave.”
.
– Aaron Michael Kerner , San Francisco State University