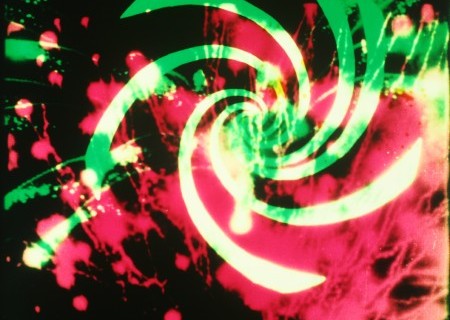 A Hundred Light Years to Here

“abstronics” is what lewis carrol would have called a portmanteou word. it is composed of the first one and a half syllables of “abstractions” and the last one and a half syllables of “electronics”. the letter “r”, fortuitously, is the hinge of the two parts”…this word, “abstronics”, was suggested to me by albert tomkins and aptly connotes this important fact: today it is possible for invisible events in the sub-atomic world to be made to have esthetic manifestations which an artist can control, and, via motion pictures, organize into an interesting and meaningful visual experience…for years i have tried to find a method for controlling a source of light to produce images in rhythm. i wanted to manipulate light to produce visual compositions in time continuity much as a musician manipulates sound to produce music… on january 31, 1932, we (bute and leon theremin!) gave our first demonstration of “the perimeters of light and sound and their possible synchronization”. this was an early use of electronics for drawings…dr. potter (of bell labs) designed an electronic circuit for such an application of the oscilloscope… by turning knobs and switches on a control board i can “draw” with a beam of light with as much freedom as with a brush… by careful conscious repeptition and experiment, i have accumulated a “repertoire” of forms. the creative possibilities are endless…”

Images & excerpts from a 1954 article in “film in review” magazine written by Mary Ellen Bute.