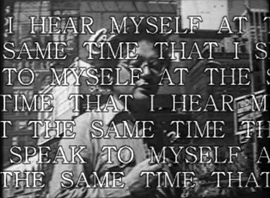 Based on a sentence taken from a seminal book by the French philosopher, Jacques Derrida, “Speech and Phenomena” (translated by David B. Allison), I began this video series in 1978 . The sentence I quoted, that Derrida calls “phenomenological essence,” appears in the translation as “I hear myself at the same time that I speak.” – Iimura