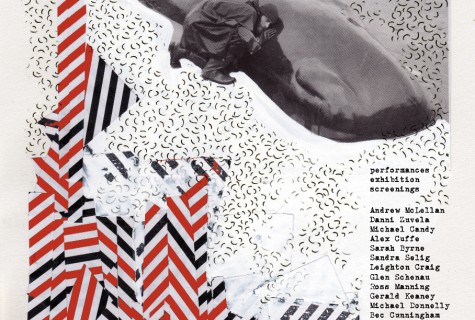 An experimental survey of Queensland wisdom / idiocy with a focus on the crossovers between noise music and contemporary art practices, PsychoSubtropics 2012 will take place in Sydney at Serial Space from June 7-10 2012. 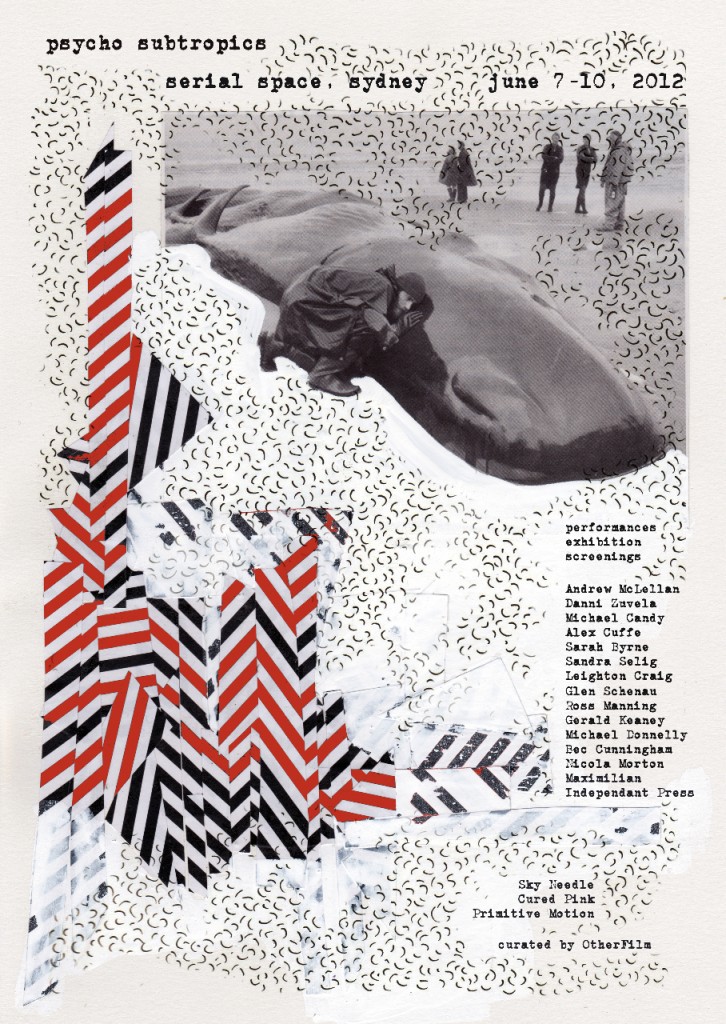 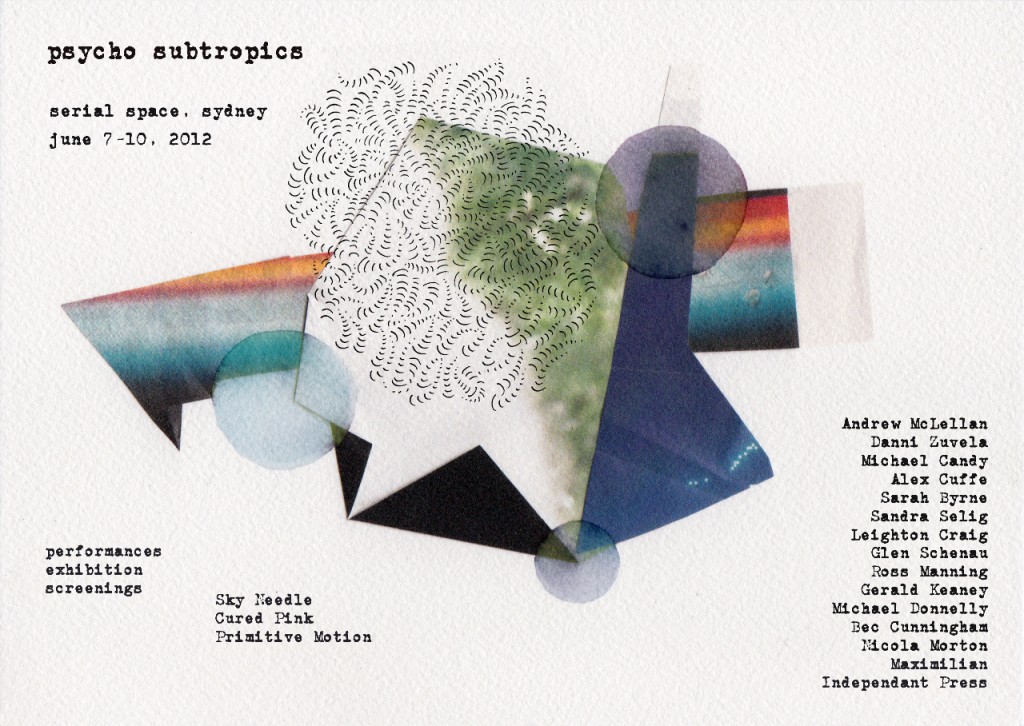 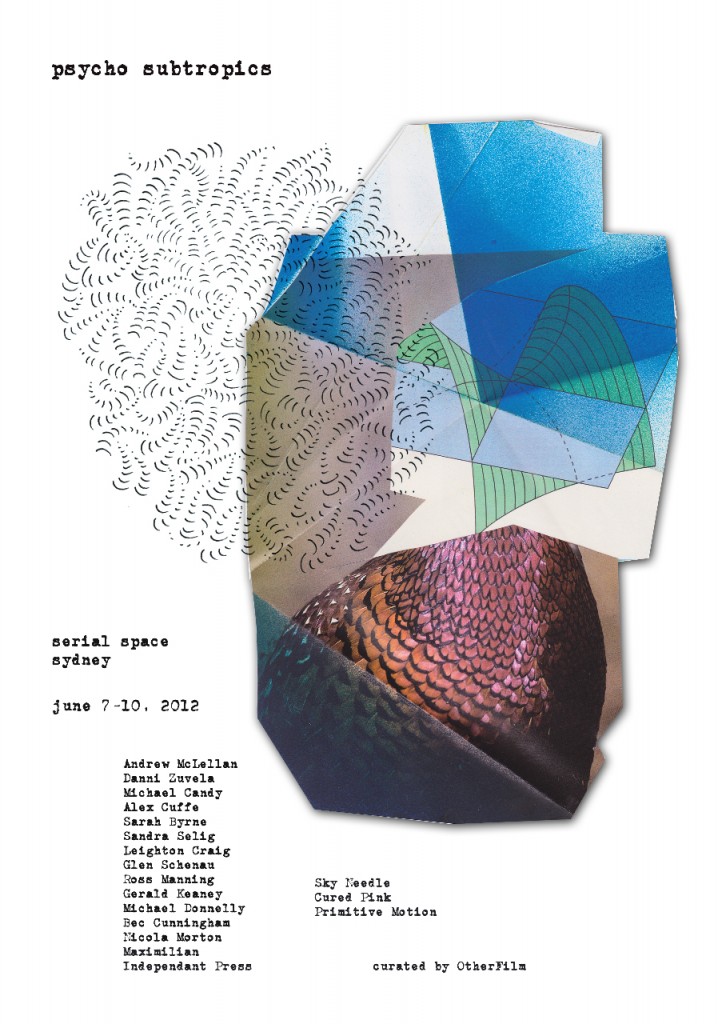 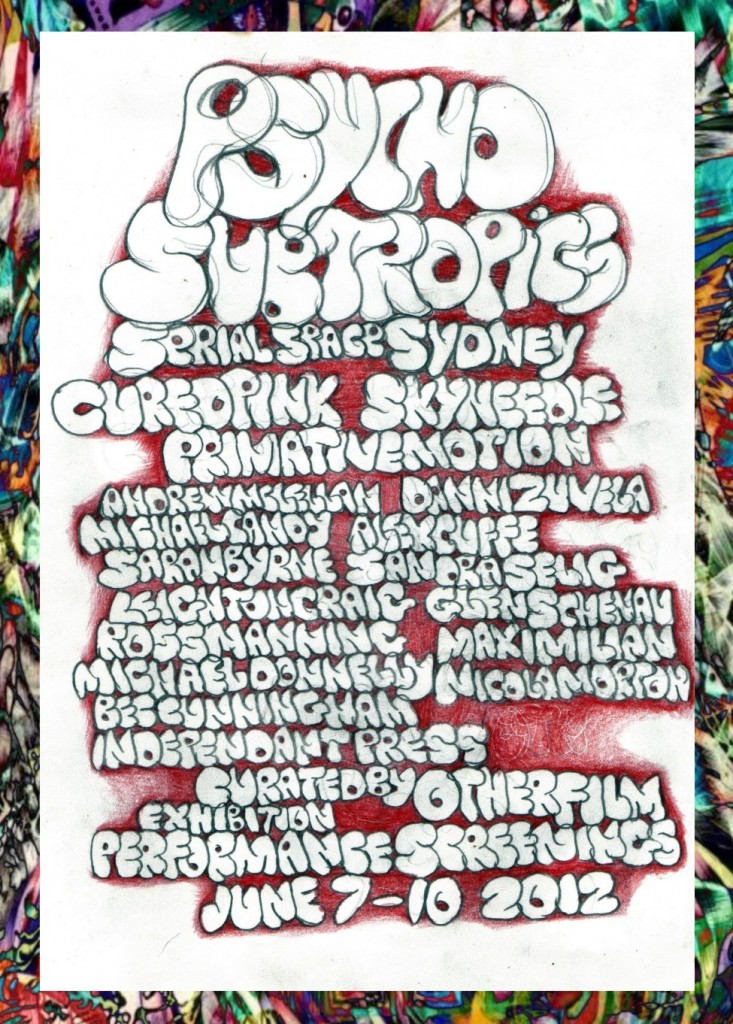 SKY NEEDLE play with homemade junk instruments in a primitive rock
mode. They recently released their debut LP Rave Cave on Negative
Guest List and have been described by Volcanic Tongue’s David Keenan
as “one of the most radically original and self-sufficient performance
units in the world”. This is Sky Needle’s Sydney launch party for the
Rave Cave LP and the Acid Perm cassette on Nihilistic Orbs.

PRIMITIVE MOTION are Brisbane adults performing sublimely tranced,
minimal pop music with keyboards, rhythm machines, saxophone, flute,
voices and healthy doses of echo. This is their first show outside of
our town.

CURED PINK is an evolving performance experiment that pits head
against body in a ridiculous race towards an abject bottom. Laugh,
cry, wince, duck, lose interest. Everything is possible. The Sydney
iteration features three members of lots of other bands. Cured Pink
were recently arrested for trespass and will be selling a tape
recording of the incident.

SARAH BYRNE catalogs, cuts and collages videos of the most nauseating,
embarrassingly shithouse, insultingly stupid pop-cultural ephemera she
can find, then somehow performs the magic trick of making these dregs
speak in profound tongues about everyday life.

MICHAEL CANDY uses his frankly baffling engineering nous to create
complex and bizarre situations that often co-opt an unwitting public.
His recent work ‘Bitter Brisbane’ involved impersonating a council
worker and installing a public bench that tilts to eject the sitter,
in a protest against council moves to force vagrants from newly
gentrified areas. The project generated a bemusing media shitstorm
with accusations flying between politicians, police threats, and an
eventual burying of the story as the council sought to douse attention
on the issues raised by the work (the dismissal of the homeless; the
stultifying blandness of gentrification). This is Michael’s first
Sydney show.

LEIGHTON CRAIG’s music and visual art convenes an unholy alliance of
geometric abstraction, electronic minimalism and nature worship. He is
one half of Primitive Motion, and he bears responsibility for the
Kindling house imprint.

ALEX CUFFE’s recent work involves the presentation of fake rocks
covered in glitter, ice cream cone objects, hacked CCTV footage and
his own beard clippings collected over a one year period. Some of the
pieces for his last exhibition were eaten by an unknown animal before
they could be shown. He also has a sideline in experimental home-brew.

BEC CUNNINGHAM talks with people, in galleries and in public spaces,
in situations she frames through subtle social, political and
sometimes intimately personal dynamics. Her ongoing durational work
ONE seeks to involve 1 million participants in a DNA exchange, leading
to a mammoth human composite that ultimately reduces to ONE. Bec
anticipates performing this work for the foreseeable future.

MICHAEL DONNELLY emerged out of the isolation of his Green Pigeon
(population 5?) shack some time in the mid 00′s becoming an online
cult phenomenon and helping to usher in a fucked folk sensibility
equal parts authentic and obfuscated. His label
musicyoumindwillloveyou and loose band-network-sect, brothers of the
occult sisterhood signalled a rekindling of harsh hippie experiments
unheard in years.

ROSS MANNING’s kinetic sculptures and energized environments are
spinning around a bunch of major art institutions these days as the
rest of Australia cottons on to his brilliance. In parallel to the
visual stuff over many years, Ross has been cutting found sounds and
crude recordings and audio assemblages that mix concrete music
formalism with intuitive noise pleasure seeking. He’ll be performing
that stuff in Sydney.

JOEL STERN has an obsession with coercing sounds into compulsive
patterns that collapse in on themselves. He is a virtuoso of
instruments no one else has or will ever play. These concerns have now
taken up half of Joel’s life. In Sydney, he will be performing with
Sky Needle and collecting flashing light devices that trigger homemade
synths. Joel is one third of OtherFilm.

ANDREW MCLELLAN should be familiar to Sydney audiences due to his
track record of dangerous stunts, industrial culture sensibility, and
nice guy shtick. His work seems to embrace pre-verbal buffoonery and
post-industrial futurism simultaneously.

NICOLA MORTON makes works informed by critical theory, intuition and
personal experience. It’s often hard to understand what she’s on
about, but trying is very satisfying. She’s not afraid of looking
foolish, since her main material is the encounter with the audience.

GLEN SCHENAU plays music in a bunch of top underground bands, makes
confounding weird noise with that primary school instrument, the
recorder, has been taking amazing analogue snaps of bands (playing)
for his blog Blanket Canvassing and has become the go-to-guy for
handmade poster assemblages that are beautiful (if a bit hard to
read).

SANDRA SELIG likes to create delicate assemblages whose fragility,
like the spider webs she uses, is belied by the strength of substance.
Sandra makes installations, collages, videos and amazing posters, and
also sweet music as one half of Primitive Motion.

DANNI ZUVELA likes to create situations where people can experience
the confounding effects of light, sound, and space. She is also into
the emotional economy of the natural world. Danni is one third of
OtherFilm.

THE MAXIMILIAN are a curatorial and publishing duo who are thinking
long and hard for important and vital things to say about contemporary
art-making. They’ve been working towards the launch of an online
platform with a bunch of handpicked contributors.

INDEPENDENT PRESS is a curatorial, publishing and commissioning
project led by Anna Zammit with a bunch of excellent heads in tow.
Career highlights include an artist newspaper, and sweet magazine, a
temporary arcade gallery and a forum on critical risk. At
PsychoSubtropics 2012 IP will be represented by Sarah Werkmeister and
Danny Ford.

OHERFILM are an artists’ collective based in Brisbane, Australia and
London, England. Since 2004, they have explored the creative
possibilities of experimental film, video, music and live performance
by curating numerous festivals, international screening programs, and
exhibitions. OtherFilm are driven by a central curiosity about the
limits of the moving image, and its capacity to reorganise human
perception. OtherFilm is co-directed by Sally Golding, Joel Stern and
Danni Zuvela.

This project has received financial assistance from the Queensland
Government through Arts Queensland.