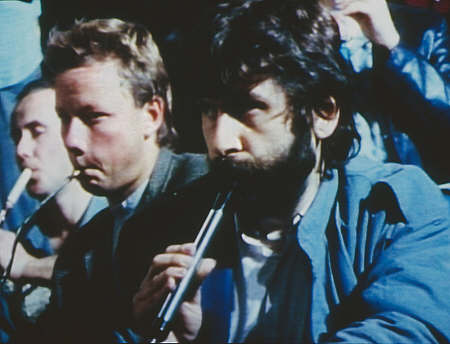 In his latest documentary film piece, Fowler outlines the history of The Scratch Orchestra, composer Cornelius Cardew’s free-thinking grouping of musicians, non-musicians and other interested parties.

Using archive footage – much of it culled from Hanne Boenisch’s 1971 television film Journey To The North Pole – alongside interviews, rostrum shots of ephemera and Super-8 vignettes, Pilgrimage From Scattered Points is at once a coherent narrative essay on the Orchestra’s history, and a fluid portrait in film of Cardew and his confreres. Divided into seven sections, the film runs from the group’s formation in 1969 to its rancorous split in the mid-1970s, by which time tensions between two factions, fostered by divisive debates on the function of art – a Maoist tendency who argued for making music to serve the people and a ‘bourgeoisie idealist’ camp devoted to formal experiment – had risen to boiling point. Along the way, we learn that the Scratch Orchestra – defined in their ‘Draft Manifesto’ as ‘a large number of enthusiasts pooling their resources (not primarily material resources) and assembling for action (music-making, performances, edification)’ – improvised from visual scores, including in one case a dog-eared copy of the Radio Times, and took a revolutionary approach to music making in more ways than one….