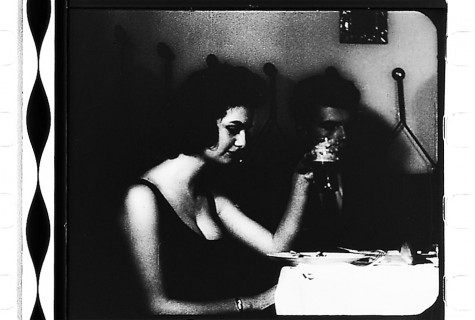 Peter Kubelka and the End of Film: Not Quite Yet.

Legendary Austrian experimental filmmaker Peter Kubelka is an extremist, yet he argues that he ‘never wanted to be radical, only consistent, like a scientist working toward his results’. Jonas Mekas said, ‘Kubelka’s cinema is like a piece of crystal, or some other object of nature: it doesn’t look like it was produced by man.’ Kubelka says his films aim to trigger ‘a cold sort of ecstasy’. In six decades, he has produced less than ten films, totaling just over an hour in running time. Most of his work was made between 1955 and 1966. After that, decades have separated projects. Now almost 80, he is still working. On Thursday 14 February at 6pm, we present Peter Kubelka and the End of Film: Not Quite Yet.

Kubelka’s first films were advertising commissions, the 90 second ADEBAR (1957) and the 60 second SCHWECHATER (1958), for a Viennese nightclub and an Austrian beer respectively. These frenetic, rhythmic films—with their hypnotic loops and syncopated variations in movement—utterly baffled their commissioners. In 1960, Kubelka followed up with a stroboscopic ‘flicker’ film, predating Tony Conrad’s classic The Flicker by six years. The film offers a rhythmic modulation of the four basic elements of cinema—light and darkness, sound and silence. Consisting of transparent and opaque frames, deafening white noise and the relative silence of untouched optical soundtrack, it shreds viewers’ nerves. He named it ARNULF RAINER after his friend, the Austrian expressionist painter.

Kubelka’s 1966 film UNSERE AFRIKAREISE (Our Trip to Africa) could not be more different—it started as a home movie. The footage shows white Europeans on an African hunting trip interacting with natives, however its disordered, non-temporal editing and jarring ‘laugh track’ frustrate any attempt to relate to these patronising bourgeoise interlopers.

The National Film and Sound Archive’s CEO, Michael Loebenstein, an expert in Austrian experimental film, will provide an introduction to Kubelka’s work and his demanding, obsessive personality, addressing his innovations with film language and his role in the creation of experimental-film institutions. In addition to showing Kubelka’s early films, we will also screen several Austrian avant-garde films in dialogue with Kubelka’s, including Kurt Kren’s notorious MAMA AND PAPER (1964), which re-presents a pornographic performance by the Aktionist Otto Muehl. To offer further context, the program includes HERNALS (1967), another metrical film by Kubelka’s contemporary Hans Schuegl, and IM FREIEN (2011), by his masterclass student Albert Sackl. These films help flesh out Kubelka’s legacy and indicate something of the specificity of Austrian experimental filmmaking.

Our thanks to Michael Loebenstein, and the National Film and Sound Archive, Canberra, who, in 2008, brought out Kubelka to strike new prints of his films. Thanks also to Six Pack Film, Austria, for lending film prints, and to the Austrian Filmmuseum for their support of the program.

A joint project of OtherFilm / IMA.