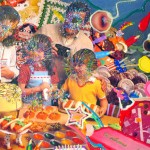 Somewhere in the murky recesses of childhood memories—of Sunday-morning television, mounds of improbably coloured junk food, and inane addictive jingles—lurks Peter Burr, a tech-gnostic agent. His mission: to subjugate the innerspace, chock open the escape hatch, and enable the immoderate two-way flow of synthesised realities. Burr’s green-screen dream is yours too. A television is broadcasting from within you as you watch it; a boiling, aberrant, hysterical fusion of mind and matter, technology and cultural form. Confronting the malaise of too much television, Burr’s diagnosis is also his prescription: more of the same!

Originally from Portland, video and performance artist Peter Burr is now based in New York. He belongs to a network of DIY underground cartoonists and musicians. In his performance Special Effect, he becomes the live presenter of a television show featuring new works commissioned from leading animators. All these works were inspired by ‘the zone’ in Andrei Tarkovsky’s 1979 sci-fi film Stalker. The site of an unnamed cataclysm, the zone is an off-limit space, pregnant with magic, mystery, and hope, where, it is said, dreams come true. With the aid of a hacked Kinect camera, hand-knitted costumes, and laser beams, Burr integrates these contributions into an imagined television show from the future. With Burr performing simultaneously in person and on screen, Special Effect recalls the way children project themselves into the fictive space of television cartoons, over-identifying with their characters. It’s hard to tell whether Burr has infiltrated television (and is now pulling the strings), whether it has absorbed him, or somehow both. The implication is that he has collaged himself at once into television and into our heads, channeling our subconscious, co-opting our illusions.