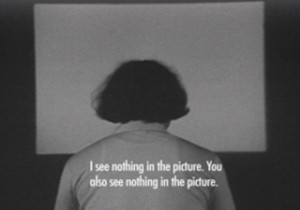 Performance / Myself (Or Video Identity)

This program is produced with “myself” as the sole object as well as the material of the performance except two videos with Akiko iimura. The video is not just a document of the performance but a work of video-art made specifically for video utilizing the video system including camera and monitor as a part of the performance. The video also questions the identity of oneself in video having tense relationships between words and images, and asks who is “I” and what “I” means.
.
In the first, “Self Identity,” I said in front of the camera, “I am Takahiko iimura,” and “I am not Takahiko iimura,” alternately. Does it sound like a ZEN-MONDO, a question and answer session of Zen monks? Yes, and no. The key of the piece is the former announced with the voice synchronized with the picture and the latter without synchronization, the voice only. Next, “Double Identity” is set in a similar context with two monitors, in which the same person in frontal view appears, facing himself. They both claim “I am T.I.,” then yield to each other, at the end both denying the identity themselves. It is subtitled “On turning the Double Negative to the Positive.” It suggests that only the viewer receives the positive, not the person in the monitor who is not able to hear what the other said.“Double Portrait” and “I Love You” are a paired piece with Akiko iimura. Both iimuras play individually and as a unit. In “Double Portrait” they are never together, but one by one in three points of view, front, side, and back, assigned to the words “I”, “You” and “He”/”She” respectively. They identify their own names positively and negatively one after the other. The pronouns rotate with every repetition, for instance, in front view with “You,” then “He/She” and back to “I.” Often the words are destroyed acoustically, making them unintelligible. Are you confused? “I Love You” is not an expression of confession, but a series of words — a linguistic practice using a sentence “I love you” in which pronouns alternate reference to subject and object (called a ‘shifter’ by linguist Roman Jakobson) based on the positions of speaker and listener. The reverberating effect in the sound multiplies the actors’ overlapping words and the male and female voices are dubbed over the image of the other gender.
.
Two other companion pieces are “This Is A Camera Which Shoots This” and “As I See You You See Me.” Both are set up facing two cameras and monitors and the performer walks between them while voicing the sentence of the title. Here the words “This” and “You” have the same form in the nominative and the objective cases, switching the roles of not only the signifier (word) but also the signified (object).
.
In the last, “I Am A Viewer, You Are A Viewer,” made on film, the performer plays the double role of the performer and the audience simultaneously, talking to his own shadow. At the end, the performer suggests the audience members move into the light to see themselves in shadow.