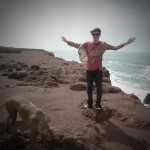 Joel Stern (b. 1979) is a curator, creative producer, musician and artist based in Melbourne, Australia.

Joel studied at RMIT in the late 1990’s in a formative atmosphere of creative interdisciplinary activity that encompassed film, video art, electronic music and emerging experimental practices. In 2000 Joel moved to London where he studied ‘sound art’ at London College of Communication under seminal figures David Toop and Cathy Lane. Over four years in London, Joel immersed himself in the city’s vibrant avant-garde music and film scenes, becoming a prominent performer and organiser.

Relocating to Brisbane Australia in 2004, Joel swiftly established a range of notable activities. With Sally Golding and Danni Zuvela, he founded OtherFilm, a curatorial project investigating historical and contemporary practices in film and moving image art. OtherFilm celebrates its 10th year in 2014, having produced numerous festivals, screening programs, and exhibitions at major institutions throughout the USA, Asia, Europe and Australia. OtherFilm maintains ongoing partnerships with Gertrude Contemporary in Melbourne, and the Institute of Modern Art in Brisbane.

In 2006 Joel founded Audiopollen, a weekly performance and radio series for experimental ideas in music and art. Dr. Julian Knowles describes how “over two years, these events involved hundreds of artists, many of whom had never previously performed … (and) was catalytic in creating and sustaining a community for experimental art in Brisbane. At a time of significant cultural growth in the city, Joel’s activities across a range of projects were a vital driver in transforming perceptions of Brisbane from cultural backwater to creative, future-oriented, risk-taking cultural centre.”

Between 2007 and 2012 Joel lectured in ‘music and sound’ at Queensland University of Technology. As an educator he established programs that critically addressed the relation between scholarly research and creative practice. His teaching influenced many students who subsequently pursued careers in music and art.

Returning home to Melbourne in 2013, Joel instigated the Instrument Builders Project, a collaborative research, development, exhibition and performance program for Indonesian and Australian artists across a range of disciplines. The Instrument Builders Project has been staged twice in Yogyakarta, Indonesia to great acclaim, and will find its third iteration in at National Gallery of Victoria, Melbourne in November 2014.

In early 2014, Joel and Danni Zuvela were appointed Artistic Director of Liquid Architecture, Australia’s longest running organisation focused on artists working with sound. In September 2014 he will deliver his first Liquid Architecture festival as director with signal events at the NGV, Federation Square and Arts House, and a touring program travelling to Sydney, Brisbane, Perth and Singapore.

Joel’s expertise has been recognised by Asialink, where he has served as long-term committee member for the residency program, and the Australia Council for the Arts, where he has been an ongoing peer assessor.

In addition to curatorial work, Joel maintains a regular performance practice as a musician. Recent notable performances include a 15-date European tour with his group Sky Needle in September 2013, and a solo performance of electronic music at Tectonics: Adelaide Festival in March 2014.

National Gallery of Victoria. Liquid Architecture; The Ear is a Brain, September 2014

College of Fine Art Sydney, Liquid Architecture; The Ear is a Brain, September 2014

Australian Centre for the Moving Image, Melbourne. Luther Price; IS IT THE TRUTH, June 2014

Victorian College of the Arts, Melbourne. Mattin; What Is Not Music?, May 2013

Institute of Modern Art, Brisbane. Peter Kubelka and the End of Film, February 2013

LIQUID ARCHITECTURE the ear is a brain