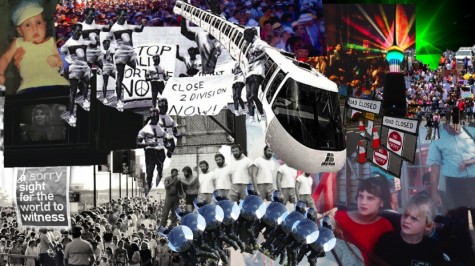 TOGETHER, WE’LL SHOW THE WORLD

Franzmann and McLellan’s TOGETHER, WE’LL SHOW THE WORLD takes machinic consistency as the first key co-ordinate in their investigation into systems of power and control. The other coordinate is you, specifically your body, as a sensing vehicle that is also social, and therefore political. In 1988, barbaric conditions at Boggo Road Gaol drove inmates to riot and hunger strike, and five men staged a week-long rooftop protest in blazing summer heat. This was also the time of the bicentennial celebrations, the year when Brisbane hosted its version of the World’s Fair Expo 88; when protestors (counter-)argued that Australia wasn’t 200 years old, and when the central theft at the heart of our nationhood went unacknowledged and obscured from view, much as today’s (increasingly privatised) prisons are sited at the contemporary city’s very outskirts. It’s also the period in which the rave was being born.

TOGETHER, WE’LL SHOW THE WORLD will shine a light on some of these dark places, by returning you to your body in Boggo Road’s infamous F Block, the space of experience and transformation.