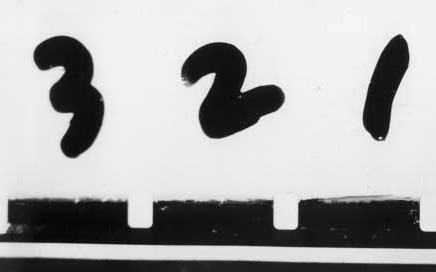 “the opening section of Models, involves three 100-foot strips of clear leader, on each of which iimura has printed numbers. In the first 100-foot strip, numbers from 1 to 24 are printed, one per frame…The result is an unusual degree of awareness of the basis pulse of the film experience.7) During the second 100-foot strip, numbers from 1 to 60 are printed on the film, one number each twenty-fourth frame. The result is an almost entirely different experience. Instead of the flickering numbers catching and holding our attention, their one-per-second appearance seems to measure off duration of light… The final 100-foot strip is measured in minutes: “1” appears at the end of the first minute, “2” at the end of the second. – Scott MacDonald, “A Critical Cinema,” California University Press)