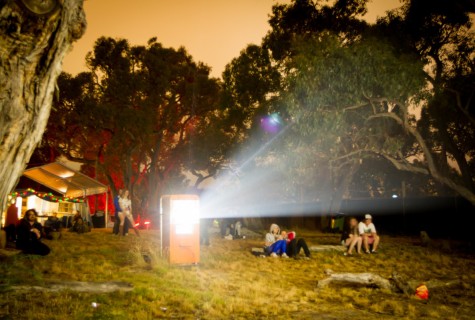 Thanks to our friends at the wonderful Ecoplex Cinema at Meredith Music Festival, OtherFilm Festival 2012 are going bush! We’re bringing a special retina-rippling touring program along to this iconic outdoor funfest for a two-night voyage into the land between awake and falling asleep. Slightly psychotic celluloid and vibrational video? Alien TV transmitting from the future? Perception-piercing strobes, intricate patterns of the intensely weird swimming up to the surface of vision? Technicolor flickerings until sunrise on the big outdoor screen in the ‘magical grove of manna gums’? It’s (a) happening.

Bruce McClure (NYC, USA) will perform extended sets of stroboscopic multi-16mm -projections on each night! Bruce’s brain-bending work really has to be experienced to be understood in any (un)realistic sense. His sounds and images are of the violent, abstract, flickering variety and have an industrial flavour to them (he supported Throbbing Gristle on tour a few years ago), but unlike the legions of noisenik tough men out there, Bruce’s performances expand and extend from the initial seismic blast into long-form investigations of spatial and temporal re-orientation – sounds and image morph and evolve in a variety of magical and unexplainable ways designed to generate a lasting transcendence that is at once deeply unnerving, slightly frightening and oddly soothing. Even meditative. Really. Bruce’s shows come with an epilepsy warning.

Sally Golding (London, UK) returns to Australia to perform a new suite of opto-sonic 16mm films specially prepared through alchemical analogue experimentation in chilly London darkrooms. Sally is world renowned as a film-performance blast technician who likes to abuse and reuse found footage in disturbing and confounding ways, however these new works, made by manipulating waveform images on the soundtrack of 16mm celluloid take her work to a new level of photo-chemical nonsensitude. What you see is what you hear – so prepare to scratch your eyes and ears in puzzlement.

Sharing is caring: In addition to these fine expanded cinema performances OtherFilm accomplices Joel Stern and Danni Zuvela will host a selection of avant-garde, psychedelic and ‘other’ generally trans-sensorial films and videos drawn from the historical vaults of the NFSA, and their private collections. A smorgasbord of new and old favourites screened by OtherFilm over the past decade, these optical goodies have been handpicked to enhance and activate the Ecoplex as the ideal site for the mutual communication of delirium.