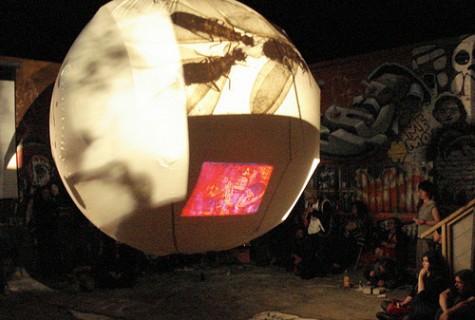 SOOB and Otherfilm invite you to explode your mind and surrender your senses at Beamathon. They will be duly returned to you in expanded condition after the show.

8:00pm-9:00pm: Acquiesce to the analogue, with the surreal program of lustrous 16mm film from the 60s, 70s and 80s, including Lenica’s Labirynt – dark collage as only Czechs know how, as a bowlerhatted visitor encounters a city filled with strange and hostile creatures; Frank Mouris’ endearingly hyperactive cut-out animated auto-bio Frank Film; Paul Sharits’ film-fetish-film Inferential Current; OFF alumna Arthur and Corinne Cantrill’s mind-bendingly beautiful colour separation dance-of-shadows, At Black Range; and Hamfat Assar by Larry Jordan, where a tightrope across an engraved seascape scene provides the backdrop for a fantastic underworld.

9:30pm-10:00pm flyingscribble:Gray and Louise are siamese. We make the sweet stuff together. First playing together in LOVEPACK (Brisbane 2000-2002) Gray (mostly rhythm) and Louise (mostly melody) we have left home, gone astray and found our way back to each other’s music pouches. We sit on a little boat together rocking on sound waves that come from the pits of somewhere deep down the waters – our music got bell soul and wood worms.

Submit your sensitive self to spirited somatic stimulation, and frolic some.